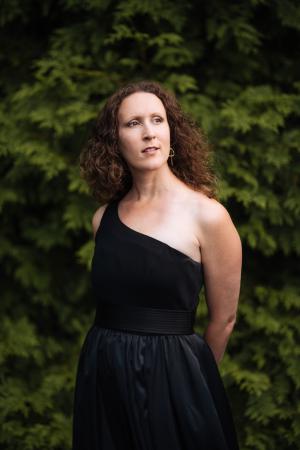 Maegan McNerney Azar began her theatre career when she was 9 years old as an orphan in the musical Annie. Since then, she has participated in community, educational, and professional theatre in states across the country. Currently, she is the Assistant Professor of Acting and Directing at Furman University in Greenville, South Carolina.

A native Floridian, Maegan grew up on Matlacha, a small fishing island on the Southwest Gulf Coast. After graduating with Salutatorian honors from Mariner High School, Maegan moved to Johnson City, Tennessee, to attend East Tennessee State University. A member of the University Honors Scholar program (now the Honors College), Maegan also played on the university’s NCAA Division I Atlantic Sun Conference Volleyball team. Her theatre hobby soon turned toward career goal when she decided to switch majors from Biology to Theatre in her third term at ETSU. Studying under Pat Cronin, Maegan worked tirelessly to become a well-rounded theatre artist — not just an actor — by studying design, theatre history, and stage management in addition to her primary acting classes. She graduated with a Bachelor of Science in Theatre in 2003 with summa cum laude honors while earning the Bud Frank Award for Excellence and the Outstanding Student in Theatre award.

From Tennessee, she traveled to Alabama where she was heavily pursued for the Masters Program in Acting Pedagogy at the University of Alabama in Tuscaloosa. Under the tutelage of Ed Williams, Peder Melhuse, Tiza Garland, and Seth Panitch, this program uniquely melded her passion for acting and her passion for teaching. The Department of Theatre and Dance afforded her the opportunity to emphasize in theatre movement, through which she studied stage combat, period styles, jazz, ballet, mask work, and Laban, while maintaining a full schedule of acting in university productions, teaching a full semester load, studying musical theatre, voice, and directing. She earned the Marian Gallaway Award for Distinguished Graduate Acting during her second year, and in 2006, she graduated with a Master of Fine Arts in Acting Pedagogy.

Maegan began her career in the professional theatre by gaining experience in summer stock outdoor theatre venues in North Carolina and Ohio. She has since worked for SummerTide Theatre, Seaside Repertory Theatre, California Theatre Center, Centre Stage South Carolina, and The Warehouse Theatre as both actor and teacher. She has been a proud member of the Southeastern Theatre Conference since 2001. She has also studied with Hamilton Camp at the Paul Sills’ Wisconsin Theatre Game Center, Ballroom Dancing at the Fred Astaire Studios in Santa Clara, California, the Laban/Bartenieff Institute of Movement Studies in New York, The Shakespeare Birthplace Trust’s Shakespeare Institute in Stratford-upon-Avon, and Accademia dell’Arte in Arezzo, Italy. Through professional experience and development, Maegan continues her training for a constantly changing theatre world.

In 2006, Maegan was appointed as the Education Director at California Theatre Center. In this position, her mission to instill a life-long appreciation for the arts in our young people took root. For CTC, Maegan not only developed every piece of eduction material, but she also worked as an actor and director for the company’s professional productions. CTC’s Theatre Conservatory, Internship Program, Great Spring Musical, Youth Professional Acting, and Outreach Programs serve thousands of students in California, Oregon, Washington, and Nevada. In 2007, Maegan also had the opportunity to design curriculum for second-language English students that was then presented on the first-ever American youth theatre tour to China. Maegan’s Conservatory students have gone on to attend top theatre schools such as University of Southern California, American Musical and Dramatic Academy, and Carnegie Mellon.

Currently, Maegan is the Associate Professor of Acting & Directing and Chair of Theatre Arts at Furman University, Vice-President of Administration of the Southeastern Theatre Conference’s Executive Committee, and a Past President and current board member of the South Carolina Theatre Association. Through her courses at Furman, Maegan attempts to engage individual growth through theatre as a professional art-form. In so doing, she hopes that students will carry their appreciation of theatre beyond the university grounds to a wider world in need of exploring the human spirit.